Governor ‘Seyi Makinde of Oyo State declared on Friday that some persons who are fond of accusing him of hating Islam or religious favoritism are individuals with skeletons in their cupboards.

The Governor, who was speaking during a brief ceremony where he presented buses to the Ansar-Ud-Deen Society, Oyo State Branch, and the Oyo Town chapter of the society, as well as the Freelance and Independent Broadcasters Association of Nigeria (FIBAN), Oyo State chapter, said that though his Government has discovered the ugly secrets of the past, it was still interrogating the details.

Makinde, according to a statement by his Chief Press Secretary, Mr. Taiwo Adisa, declared that he will continue to serve the people of the State with fairness and the fear of God, irrespective of their religions.

He maintained that those struggling hard to divide the State with religious sentiments by insinuating that his administration hates Muslims, were only trying to cover their dirty past.

According to the Governor, “if some elements are saying I don’t like Muslims, it is what they have done in secret that is disturbing their minds.

“We have seen all that they did but we are still interrogating the details. If we decide to put it in the public, some may say it is confirmation that I don’t like Muslims,” he said.

The Governor added: “My Special Assistant on Islamic Affairs has said most of the things meant to be said. But one thing he didn’t remember to say is that the Imam of Omituntun has been there since 2014.

“We started building the Omituntun Mosque structure in 2013 and we completed it in 2014. As of that time, those who were my closest aides were three and they are all Muslims.

“I want to say it again that I love both the Muslims and the Christians as well as the traditionalists. We must not discriminate and we have to be fair to everybody. And we believe that whatever we do, we will get the reward from God.

“We are serving you as your servants. I came to you to give us the opportunity to serve you and you did. So, I believe we must serve you with the fear of God.

“So, today, I want to fulfill part of the promises I made before I got elected as the Governor of Oyo State. I promised that, when I become the Governor, I would do my best to support people from both religions. That is why I want to donate a bus each to the Ansar-Ud-Deen of Oyo State and that of Oyo Town, to propagate the gospel of Islam.”

Also speaking during the presentation of the buses, a former Speaker of the Oyo State House of Assembly and senator who represented Oyo Central between 2015 and 2019, Senator Monsurat Sunmonu, who is also member of the Ansar-Ud-Deen Society, commended Governor Makinde for running an all-inclusive Government.

She maintained that as a part of the coalition of parties that brought the Government into power, she has been giving support to the Government because it is doing things right, calling for prayers for the Governor and the Government.

She said: “You all know that I was once a Speaker in this State and Senator that represented Oyo Central Senatorial District. So, I can understand what is called governance. We are looking round to gather people within Oyo State for us to be able to support the Governor Makinde-led administration to succeed.

“In doing this, the Governor deemed it fit to get us a vehicle for movement, not for politics but for the course of their duties. As Muslims, they will be moving around mosques and everywhere to propagate the Islamic religion.

“Also, for FIBAN, they are part of the constituency of the Governor. When the Governor met them, they requested for vehicle and they came through me to collect it. So, we thank him and all the good people of Oyo State.

“We are not playing politics of ‘pulling someone down by all means’ but whenever we see something being done in the right manner, we are bound to give support.”

Chairman of Ansar-Ud-Deen Society, Alhaji Babatunde Oladejo expressed happiness with the donation, stating that it will help in its programmes to enlighten people on Islam and “probably the development in the Government circle.”

“As I said during my sermon, Oyo State is a technical place to govern but the Governor has been trying and all we need to do is to keep assisting him with prayers. We should also try as much as possible to let the people know the good works he is doing in the State.”

The chairman of the Oyo State chapter of FIBAN, Pastor Seun Akindele, also expressed gratitude to the Governor for the donation, stating that it was a surprise to the body. 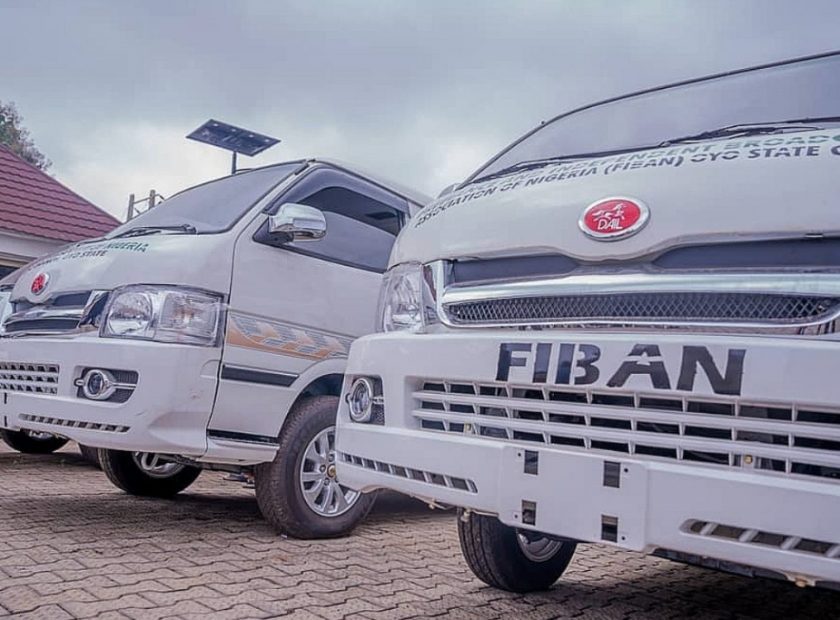